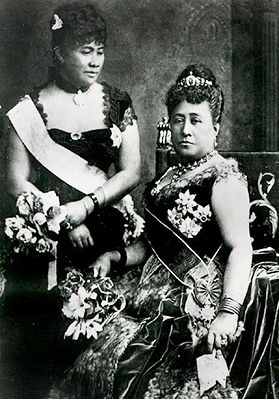 The history of Hawaiian Jewelry dates back to the 19th Century. Several version of the origins of Hawaiian jewelry have been passed on for generations.  Legend tells of Queen Kapiolani & then Princess Liliʻuokalani attending Queen Victoria’s Golden Jubilee where they received bracelets engraved with their names but the first bracelet designed by Queen Lili'uokalani was commissioned in 1862.

Inspired by Victorian style and in celebration with her close friendship with England’s Queen Victoria & Prince Albert, Queen Liliʻuokalani commissioned a bracelet with Hoʻomanaʻo Mau (Lasting Memory) in old English letters in black enamel. This bracelet became a beloved treasure she wore her entire life.

In 1893 Queen Liliʻuokalani presented Zoe Atkinson, daughter of Alatau Tomchiboulac Atkinson, with a gold bangle engraved with ʻAloha ʻOe in black enamel letters. Atkinson was the Principal of Pohukaina Girls School and at the Queenʻs request, the social coordinator for various galas at ʻIolani Palace and the bracelet was to thank her for her contributions.

Atkinson wore her bangle to school and the students were immediately enchanted. Soon mothers started ordering bracelets for their daughters. Traditionally given as a birthday or graduation gifts, mothers and grandmothers often wore the bracelets themselves until the girls were old enough to care for their treasured heirloom. Thus, a legacy was born and it lives on today, stronger than ever.

Hawaiian jewelry is often given to celebrate milestones - birthdays, graduations, weddings, and anniversaries. These pieces are an heirloom to be passed from generation to generation. With their timeless beauty comes all the magic, tradition, & pride of the Hawaiian culture when you wear these treasured heirlooms.